Michigan State University, University of Houston and University of Maryland – College Park were each awarded $10,000 from ExxonMobil and NSBE during an event held at the Carnegie Institution for Science in Washington, D.C. on April 18. Awards were presented by Dr. Carl Mack, executive director of NSBE, and Kenny Warren, vice president of engineering, ExxonMobil.

“NSBE salutes these outstanding academic institutions for their success in keeping black, Latino and other underrepresented minority students in engineering,” said Mack. “There is an urgent need for more skilled workers in science, technology, engineering and math fields; the United States cannot afford to continue losing two-thirds of these students to other majors, as it is doing now. These universities are among the few that not only understand the urgency of solving the retention problem in engineering, but are also creative and determined in coming up with solutions.”

The Impact Award was established in 2011 by ExxonMobil and NSBE to honor and recognize collegiate efforts to attract minority students to and retain them in engineering disciplines. Additionally, each program is recognized for its ability to be easily replicated and shared across the nation through NSBE.

“ExxonMobil is proud to partner with NSBE to recognize the outstanding efforts of universities nationwide in identifying, mentoring, retaining and graduating the next generation of talented engineers,” said Suzanne McCarron, general manager, public and government affairs, Exxon Mobil Corporation.

The need to encourage minority students toward engineering degrees is critical if U.S. employers hope to keep up with workforce demands. According to the U.S. Census Bureau 2010 Statistical Abstract, Latinos make up 16.3 percent and African Americans comprise 12.6 percent of the U.S. population, but only 6.2 and 5 percent respectively of the engineering workforce.

Michigan State University’s Scholars Program, the University of Houston’s Program for Mastery in Engineering and the University of Maryland – College Park’s Louis Stokes Alliance for Minority Participation Program were selected for their demonstrated results-based progress in retaining underrepresented minority students in engineering-related programs.

Michigan State University – The Diversity Programs Office “Scholars Program” (DPO-SP) provides structure for students during their first two years, which are the most critical of a college student’s experience. Mandatory program participation ensures a high level of commitment from both students and faculty engaged with the DPO-SP to combat declining enrollment and graduation rates in science, technology, engineering and math fields. This early focus has allowed Michigan State University to attain 78 percent graduation rates among the DPO-SP cohorts. Additional program components include opportunities for summer employment, research and increased access to faculty.

University of Houston - The Cullen College of Engineering actively seeks to close higher-education gaps in student participation and student success in science, technology, engineering and math fields through the Program for Mastery in Engineering Studies (PROMES, pronounced “Promise”). Student success strategies include cohorting new students into first-year courses, providing sophomores with peer-led supplemental learning in support of gatekeeper engineering and individualized academic advising. Formal and informal mentoring is also utilized in addition to ongoing personal and professional development opportunities through seminars and industry mentoring for upperclassmen.

University of Maryland - College Park – Through the Louis Stokes Alliance for Minority Participation Program, funded by the National Science Foundation, the University of Maryland - College Park’s Bridge Program enrolls freshmen in coursework before their first semester in order to increase the quantity and quality of students receiving baccalaureate degrees in science and engineering. Created in 1984, as a diversity initiative in the A. James Clark School of Engineering, the Bridge Program is a four-year retention program which includes leadership opportunities, study abroad, research, career development and graduate school preparation.

The grant is part of ExxonMobil’s longstanding partnership with NSBE, dating back to 1989, and has included nearly $1 million in philanthropic support of the organization.

Past Impact Award recipients are Purdue University, Virginia Tech and University of Texas at Austin.

The National Society of Black Engineers (NSBE), with more than 30,000 members, is one of the largest student-governed organizations in the country. Founded in 1975, NSBE now includes more than 394 College, Pre-College, and Technical Professional/Alumni chapters in the United States and abroad. NSBE’s mission is "to increase the number of culturally responsible black engineers who excel academically, succeed professionally and positively impact the community."

ExxonMobil is the world's largest publicly traded international oil and gas company, providing energy that helps underpin growing economies and improve living standards around the world. ExxonMobil also engages in a range of philanthropic activities that advance education, health and science in the communities where ExxonMobil has significant operations. In 2011, together with its employees and retirees, Exxon Mobil Corporation (NYSE:XOM), its divisions and affiliates, and ExxonMobil Foundation provided $278 million in contributions worldwide, of which $120 million was dedicated to education. Additional information on ExxonMobil’s community partnerships and contributions programs is available at www.exxonmobil.com/community or follow us at www.twitter.com/exxonmobil. 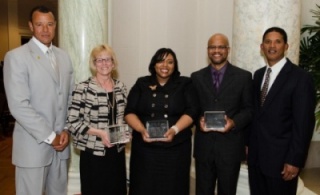