“We have deep tradition in supporting education and are extremely proud of our longstanding partnership with TMCF. This amazing organization continues to help thousands of students professionally develop and attain a higher education,” said Steve Canal, national community affairs for MillerCoors. “MillerCoors is committed to empowering the next generation of leaders by providing educational resources and guidance.”

“As a founding partner, MillerCoors has been there for TMCF and our 300,000 students from day one,” said TMCF President & CEO Johnny C. Taylor, Jr. “Last night, MillerCoors gave our community $1.2 million to open the door yet again for more black college teachers to bring their best to America’s public K-12 classrooms and more HBCU college graduates to become future business leaders -- beginning and building their careers at an iconic company like MillerCoors. Their commitment to TMCF for over 28 years has continued to demonstrate to other companies why supporting HBCUs is smart for our country -- and we are most grateful!”

The funding will support their Teacher Quality and Retention program; as well as a number of students will receive a scholarship. MillerCoors also provides real-world experience for program scholars through its summer internship program, career readiness counseling and on-site student interviews during its annual career fairs. Furthermore, MillerCoors actively recruits students for employment opportunities. For more information please visit www.millercoors.com. 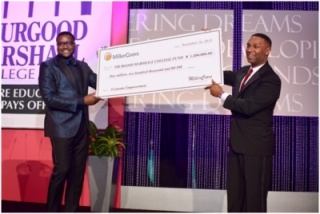