Mrs. Obama Also Announced When We All Vote's New Volunteer Program - Voting Squads - and a Host of Community, Corporate, and Media Partners Joining the Initiative's Efforts.

(Black PR Wire) WASHINGTON, Michelle Obama released a video message announcing 7 new Co-Chairs joining When We All Vote, a national, nonpartisan organization launched in 2018 to increase participation in every election.

The video is being released to mark one year until the 2020 General Elections. In the video message, the Co-Chairs urge Americans to join When We All Vote and sign up to create their own "Voting Squads".

"Last year... Millions of new voters made their voices heard for the first time. Now the stakes are even higher and we are looking to you. Our country—our democracy—is counting on you," said Mrs. Obama. A full transcript of the video is below.

In the months directly before the 2018 midterm elections, When We All Vote organized over 2,500 local voter registration events across the country, engaged 200 million Americans online about the significance of voting, and texted nearly four million voters the resources to register and get out to vote.

This year's Voting Squad program builds on When We All Vote's successful 2018 digital campaign where we encouraged Americans to get out to vote. Now, When We All Vote is calling on Americans to organize their own Squads, volunteer groups aimed at getting friends, family, classmates and community registered and ready to vote.

When We All Vote also released a commemorative poster to celebrate Mrs. Obama's Voting Squad.

Additionally, When We All Vote is excited to announce a number of community, corporate and media partners working closely with the organization, all committed to helping eligible Americans exercise their right to vote including, but not limited to:

This past Summer, When We All Vote launched My School Votes a new initiative calling on educators, students and their parents across the country to engage and register their peers to vote. Since the launch in July, thousands of teachers and students have responded by joining When We All Vote and starting voter registration programs at their schools.

ABOUT When We All Vote: When We All Vote is a national, nonpartisan, non-profit that brings together citizens, institutions, brands, and organizations to increase participation in every election. We are committed to closing the race and age voting gap and empowering all eligible voters to cast their ballot by harnessing grassroots energy, establishing strategic partnerships, and implementing digital organizing strategies.

Launched in 2018 by co-chairs Michelle Obama, Tom Hanks, Lin-Manuel Miranda, Janelle Monáe, Chris Paul, Faith Hill, and Tim McGraw, When We All Vote is changing the culture around voting using a data-driven and multifaceted approach to increase participation in elections.

In the months directly before the 2018 midterm elections, When We All Vote organized 2,500 local voter registration events across the country, engaged 200 million Americans online about the significance of voting, and texted nearly four million voters the resources to register and get out to vote.

Mrs. Obama: Last year, we went big. Millions of new voters made their voices heard for the first time. Now, the stakes are even higher. That's why I've been reaching out to some friends to expand my voting squad for the year ahead.

Janelle Monae: It all starts with you.

Selena Gomez: You are the only person-

Tom Hanks: ... who can have that conversation-

Faith Hill: ... with your family and your friends-

Tracie Ellis Ross: ... and your girlfriends.

Shonda Rhimes: And even with your community.

Lin Manuel Miranda: To get them registered and ready to vote.

Liza Koshy: Or just send them a text or slide into their DMs. And say, "Yo. You up?" Good. Cause you need to squad up.

Tracie Ellis Ross: We need you...

Chris Paul: ... to draft your own championship voting squad.

Megan Rapinoe: It's up to you to change the game.

Kerry Washington: Because when we squad up...

Selena Gomez: When we make our voices heard…

Faith Hill: When we all vote…

Janelle Monae: ... we can change the world.

Shonda Rhimes: Let's get to work. 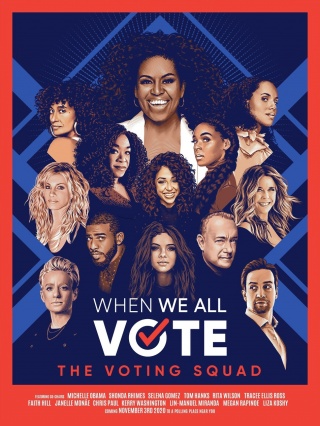