(Black PR Wire) MIAMI GARDENS, FL — The City of Miami Gardens is pleased to announce that Vice-Mayor Dr. Erhabor Ighodaro has been awarded the Nathan W. Collier Meritorious Service Award by Florida Memorial University. The award is given for exceptional service to the University, and for outstanding achievements in the honoree’s community. Vice-Mayor Ighodaro accepted his award at the 139th Founder’s Day Convocation on March 15, 2018.

The Nathan W. Collier Meritorious Service Award was named for Dr. Nathan White Collier, who served as President of Florida Baptist Academy and the Florida Normal and Industrial Institute from 1896 to 1941.

Vice Mayor Ighodaro is an educator with a background in public management, urban justice, urban education, curricula design and implementation of best practice methodologies, educational public policy and the intervention and resolution of school and community based conflict. He serves as Professor of Criminal Justice at Florida Memorial University, and he is the Founder/CEO of Oracle Consulting Group, LLC a dispute systems design and conflict resolution firm and he is a Florida Supreme Court Certified Family Mediator.

As Executive Director of the Dr. Robert B. Ingram Foundation, Dr. Ighodaro oversees the organization's signature READ to LEAD program and has awarded over 5000 scholarships to students in Miami-Dade County Public Schools. These scholarships entitle students to an all-expenses paid educational excursion of Black history sites in Florida.

A former Miami-Dade County Public School Teacher and former Chief of Staff to School Board Member Dr. Robert Ingram, Dr. Ighodaro serves as the Miami-Dade School District's Administrator for the Ingram Africa School Alliance (IASA) "Rites of Passage" Project and leads a delegation of students, teachers and parents on the district's annual excursion and student exchange opportunities with schools in Africa.

Dr. Ighodaro has been recognized by Legacy Magazine as one of 50 Most Powerful Blacks in Miami Dade County (2016). He is a recipient of numerous awards; he received the United Negro College Fund (UNCF) Hall of Honor Award (2016), the Miami Dade County "Pillars Award" 2012 and the prestigious Bryant Gumble/UNCF Scholarship (1996). He is an NAIA Academic All-American. He is an Alpha Kappa Mu Honorary Scholar and an Omega Scholar of the year (1996). He is past President of the Rotary Club of OpaLocka/Miami Gardens and Past President of the Nigerian American Foundation. He is a member of Edo Association of Florida; National Association for the Advancement of Colored People (NAACP); Miami Dade County International Trade Advisory Board; Miami Dade County Public School's 5000 Role Model of Excellence Project, a nationally acclaimed youth mentorship initiative; Omega Psi Phi Fraternity, Incorporated and an Associate Minister at Mt. Zion AME Church, Miami Gardens.

Dr. Ighodaro has worked with diverse political constituencies in the Miami Dade community and was appointed in 2012 by Mayor Oliver Gilbert to serve on the Miami Gardens City Council, at-Large Seat 6. He was subsequently elected in 2014 with the highest vote count in the history of the city. On the council he has established himself as a trailblazer and consensus builder. He has championed commemorative events for Haitians, Hispanics and hosts the City’s annual Black History and International Music Festival celebrations. A promoter of inclusion he has pioneered the City’s efforts for its special needs population, and created Miami Gardens’ own Special Olympics Games. He hosts the City’s annual Stand Against Violence It’s Our Responsibility (S.A.V.I.O.R.) community violence and crime prevention initiative, and holds a monthly community and town hall meeting “Uni’Tea.” Vice Mayor Ighodaro recently sponsored a resolution to host the City’s first radio show Miami Gardens.

An advocate for small businesses, Dr. Ighodaro established the business of the month recognition program and was an architect for the city’s Business and Resident Economic Plan.

ABOUT THE CITY OF MIAMI GARDENS The City of Miami Gardens was incorporated on May 13, 2003, and is the 33rd city in Miami-Dade County. With a population of approximately 113,000, it is the third largest city in Miami-Dade County. Miami Gardens is a solid, working and middle class community of unique diversity. It is the largest predominantly African-American municipality in Florida and boasts many Caribbean and Hispanic residents. The City hosted the 2010 FedEx Orange Bowl, the 2010 NFL Pro Bowl™, Super Bowl XLIV™, 2013 Orange Bowl and 2013 BCS National Championship game. The City has demonstrated steady growth in the areas of community and economic development, and has gained a reputation for being a hot destination in South Florida. www.miamigardens-fl.gov. 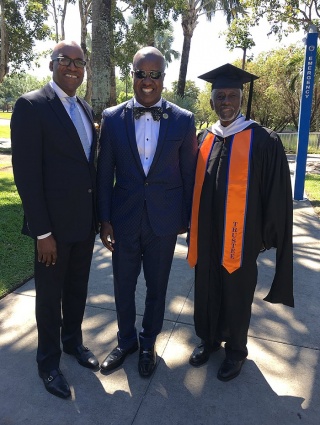