(BLACK PR WIRE) – The Miami Hurricanes finally played a home game and came away with a much needed 38-10 victory over the Bethune-Cookman Wildcats before an appreciative crowd of 39,435.

Hurricanes RB Duke Johnson played his first college home football game at Sun Life Stadium, which is only a couple of miles away from where he attended high school, and he did more than enough to make it memorable for his many family and friends who were in attendance. Johnson scored electrifying touchdowns in just about every way possible. He rushed for two on both a 1 yard sweep around the left end and a 28 yard scamper up the middle, and he also caught a short screen pass from Junior QB Stephen Morris and took it all the way to the goal line for a 50 yard touchdown reception.

But his most impressive score was when, late in the first quarter and Miami down 7-0, Johnson took a kickoff deep on Miami’s 5 yard line and returned it 95 yards for a touchdown. After catching the kickoff, Johnson went full speed, straight ahead and with one small move to the right, he quickly weaved back to his left following a great block by Tyrone Cornelius, who sealed off two Wildcat defenders. At that very moment, Johnson saw only 60 yards of green grass in front of him and that is when he ducked his head down just a little, signaling that he was kicking it into extreme high gear. Indeed, by the time he reached the goal line the nearest defender was 15 yards away.

For all of Johnson’s hard work, he was named ACC Rookie of the Week for the second time in just three weeks. Hurricanes fans have come to expect this type of explosive speed and elusiveness every time Johnson touches the ball. On Saturday, each time Johnson entered the game, you could hear the crowd yelling a long “DUUUUUUUKE”, anticipating an exciting play. With 246 all purpose yards, Johnson did not disappoint, and is now ranked second in the nation in all purpose running.

After a crushing defeat at the hands of Kansas State in Manhattan, KS, a resounding victory at home was just what the doctor ordered. Although the Miami defense still allowed over 350 yards of total offense, the outcome was never really in doubt as they stopped Bethune-Cookman’s offense from scoring on eight consecutive drives after the Wildcats scored their first and only touchdown in the middle of the 1st quarter.

On offense, QB Morris shook off a shaky first half, when he made a number of errant throws, to finish the game with 20 completions in 35 pass attempts for 211 yards, with one touchdown and one interception. Still, he was able to distribute the ball to nine different receivers for Miami on his way to his third straight game of over 200 yards passing.

With a number of early departures to the NFL, Miami is already a very young team, and with a few key players already out with injuries, 14 of Miami’s 22 starters are underclassmen. Coach Al Golden has done a masterful job rotating many more underclassmen on to the field to begin shoring up some depth and so that they can get their feet wet before the heart of the ACC season begins this week.

It’s a good thing too, because Miami is going to have to play much better in every facet of the game when they travel to Atlanta to play ACC intra-division rival Georgia Tech this Saturday. Although Miami has won the last three outings between these two schools, this year Georgia Tech has the 18th ranked team in total defense. Georgia Tech’s record is 2-1, with their only loss coming in overtime against ACC rival Virginia Tech, in a heart-wrenching opening season away game. 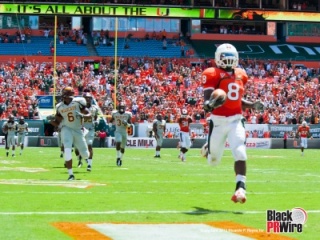