(BLACK PR WIRE) – The 12th ranked Florida State Seminoles overcame an error-filled first quarter to beat their in-state and ACC rival the Miami Hurricanes, 33-20, before a boisterous crowd of 73,328 at Sun Life Stadium.

Florida State (7-1, 4-1 ACC) used a relentless and fast defense to stifle Miami’s young offense. And when the Seminoles had the ball, they relied on the cool hand of their leader, senior QB EJ Manuel to either hand off to a stable of productive running backs, keep the ball himself to gain substantial yards or pass for some of his 229 yards.

With only a 16-13 lead at the beginning of the 4th quarter, Manuel engineered a beautiful seven play, 74 yard scoring drive where each of the seven plays earned positive yards. The drive ended when RB Devonta Freeman ran for a touchdown from the three yard line. Two drives later, Freeman would score his second touchdown of the night to seal the victory.

Like so many games before in this wild rivalry game, the team that dominates the running game most often comes out with the victory, and this year was no different from the previous games. Florida State used four different running backs to rush for 198 yards on only 27 carries, gaining well over seven yards per carry.

In the 4th quarter alone, Florida State pounded the weary Miami defense with 15 rushes, scoring on all three of their offensive drives, totaling 17 unanswered points and possessing the ball nearly 10 minutes. All in all, Florida State’s offense gained 447 yards in a balanced attack that kept Miami’s offense off the field.
Miami (4-4, 3-2) has now lost three games in a row and in this rivalry, they have lost the last three meetings with Florida State, and six out of the last eight.

The game began with Miami gaining all of the momentum by forcing two Florida State fumbles and benefitting from a punting miscue. However, the Hurricanes could only turn these gifts into 10 points as Miami’s offense continued to hurt themselves with their own mistakes.

Miami’s QB Stephen Morris, while nursing a sprained ankle, was harassed much of the game by the nation’s 2nd ranked defense. Hurried and under pressure, Morris could not consistently sit in the pocket to wait for his receivers to get open. Morris was sacked four times, fumbled once and threw one interception to go along with his one touchdown pass and 223 passing yards.

Unfortunately, that was the highlight of Miami’s rushing attack, with Florida State’s defensive line consistently having its way on the line of scrimmage. Miami’s running backs finished with 16 carries for only 52 yards.

"Give Florida State a lot of credit," Miami coach Al Golden said after the game. "They're a very good team. I thought we played hard. I thought we coached hard, and we lost to a good team. That’s it. We lost to a team that is ahead of us right now. We have to develop our guys and recruit some more and keep working, and don’t make any excuses. We had opportunities that we did not convert. They did – hats off to them. Clearly they have an excellent pass rush and got to our quarterback, and we’re not doing the same on the other end.”

Miami will take a much needed break with an upcoming bye week. Soon enough, they will begin preparing for their home contest with Virginia Tech on Thursday night, November 1. This game will go far in deciding who will represent the Coastal division in the ACC Championship game December 1 in Charlotte, NC. 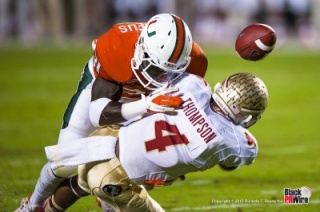 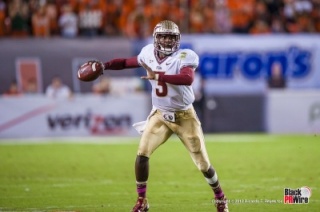 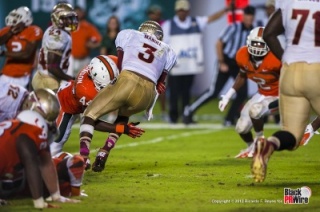