(BLACK PR WIRE) – ATLANTA – October 29, 2014 – TV personality, comedian, radio show host and author Steve Harvey comes to primetime on UP in an exclusive one-man show, "A Special Night with Steve Harvey: Act Like a Success, Think Like a Success." Taped before a live audience at Chicago’s Harris Theater for Music and Dance in Millennium Park, the UP Original Special brings to life inspirational and practical themes about how to succeed in life and the keys to fulfilling one’s mission as presented in Harvey’s #1 New York Times bestselling book, Act Like A Success, Think Like A Success. The one-hour UP Original Special will premiere on Wednesday, October 29 at 9 p.m. EDT.

Emotional, impactful, enlightening and often times hilarious, in the UP Special, Harvey brings to life his tenets for success as described in Act Like a Success, Think Like a Success: Discovering Your Gift and the Way to Life’s Riches book. Now an accomplished entrepreneur and esteemed philanthropist, Harvey shares his personal story with the audience – including how he struggled to gain success from, at one point, being homeless and living out of his car – and introduces five of his tenets to success.

Before a packed-to-capacity audience, Harvey relays lively anecdotes from his own life, practical advice and truthful insights on how to achieve one’s dreams using the gift(s) each person already has. He shares his thoughts about how that gift holds each person’s greatest chance at success and the fulfillment of their life mission and purpose. Through his five tenets, he enlightens viewers that one’s passion is not the same as one’s gift. He encourages people to define their gift – whether it’s being a problem solver, a people-connector, a whiz with numbers, or having an eye for colors. While one’s gift can be used professionally, it is also central to relationships, marriage, the community and ultimately touches upon every aspect of life.

"Steve Harvey is an extraordinary talent whose style captures and mesmerizes the minds of people, particularly everyday people,” said Brad Siegel, vice chairman, UP. "His new #1 New York Times bestselling book, Act Like a Success, Think Like a Success, is a wonderfully uplifting, inspirational and practical guide to becoming the best that you can be in all facets of life. This special provides a highly entertaining and enlightening roadmap to help every individual fulfill their dreams and completely aligns with UP’s mission of uplifting our viewers.”

Harvey said, “This is the best special I’ve ever done, it will be my best contribution to the very people who have supported me over the years… I want to help change people’s direction in life to a higher state of being… I want people to experience the joy of success and the process!”

UP is the television network dedicated to uplifting viewers every day with original and acquired movies, reality and dramatic series, comedies and music specials. One of the most trusted family-friendly networks on cable, UP can be seen in 67 million homes on cable systems and satellite providers across the United States in both standard and high definition. Along with its mission to entertain, uplift and inspire viewers, UP’s pro-social initiative “Uplift Someone” reminds and inspires people to do simple acts of kindness. Based in Atlanta, UP is a division of UP Entertainment, LLC, and provides sales and operations services to the ASPiRE network. Follow UP on the Web at www.UPtv.com, on Facebook at https://www.facebook.com/UPtv, Twitter on @UPtv and Instagram at UP_TV.

Black Robin Media is a full-service television and video production company that brings to life some of the industry’s most innovative projects. From TV programs, series, short films and digital content to promos, PSAs, and commercials, Black Robin Media’s award-winning creative team uses the art of storytelling, imagery and sound, along with the latest media technology to connect with audiences around the world. For more information, visit www.blackrobinmedia.com. 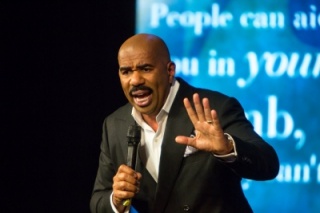