(Black PR Wire) January 2015 - “Boo Yah!” and “cool as the other side of the pillow” were just a few of Stuart Scott’s memorable catch phrases during his tenure as a sportscaster for ESPN Sports Center. Scott’s enthusiasm for his work made him an unforgettable individual in the athletic world.

Stuart was diagnosed with cancer in November 2007 after being sent to the hospital for and emergency appendectomy where they found evidence of malignancy. On Sunday morning of January 4, 2015, Stuart Scott passed away from the disease. He was 49 years old. Family, friends, co-workers, athletes and celebrities posted their condolences on social media, reminiscing about the times they had with the talented sports guru. Sports events all over the nation paused for a moment of silence in honor of Scott.

Stuart Scott, originally from Chicago, was a dedicated father of his children, Taelor and Sydni Scott. Before he became a well-known ESPN reporter he was an actor in college productions at University of North Carolina according to TV Guide. Scott also was a reporter for his school radio station and pledged for Alpha Phi Alpha fraternity. He began working for ESPN in 1993 where developed his own personal style and his well-known catch phrases. Stuart’s collaboration with Rich Eisen was one of the most successful, must-watch segments on ESPN at the time according to Rolling Stone. He brought a new and dynamic way to storytelling and his colleagues admired him for that. In 2014, Scott was presented the Jimmy V award at the ESPYS.

Stuart Scott will always be known as one of the most successful sportscasters on ESPN. His strength and perseverance throughout his difficult struggle with cancer is an inspiration for others battling with this disease. His confident yet fun side set the bar for every sports reporter in this decade. He is as “cool as the other side of the pillow” and will remain in our hearts forever. Rest in Peace, Stuart Scott. 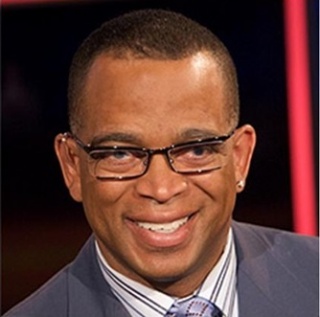