(Black PR Wire) We Are Charleston – an essential, multi-layered exploration of the tragic events experienced by South Carolina’s famed Mother Emanuel Church last summer – has been released through the W Publishing Group, an imprint of Thomas Nelson.

The book, written by South Carolina-based writers Herb Frazier (award-winning journalist and childhood member of Mother Emanuel), Dr. Bernard Edward Powers (AME Church member and professor of history at the College of Charleston) and Majory Wentworth (South Carolina’s Poet Laureate), is based on extensive interviews with family and friends of “The Emanuel Nine” – the church members who lost their lives on June 17, 2015, when a young white man opened fire on a prayer meeting at the church.

Additionally, We Are Charleston details the triumphant 230-year history of the AME Church – the largest body of African-American Methodists with 7.5 million members world-wide – and its role in America’s social justice story from slavery to the civil rights movement. The book discusses the importance of Mother Emanuel Church itself, both to the Charleston community and to the nation. The oldest AME church in the Deep South, Mother Emanuel’s perseverance in the face of adversity and discrimination serves as an example of faith and forgiveness to the entire world. It was no coincidence that this particular church was chosen for this grievous act.

“Nothing this tragic happens in a vacuum. Whether it be terrorism abroad or racism within, we have become the products of many years of anger in our culture,” said Matt Baugher, Senior Vice President of Thomas Nelson and Publisher of W Publishing Group. “Through its powerful portrayal of history and its stirring narrative from the present day, We are Charleston brilliantly shows all of us the importance of awareness, action, and yes, even forgiveness. I can think of no better people to write this book than these three individuals, each with their own ties to the city, the church, and the issue at hand. We’re honored to publish this important work.”

“The tragedy at Mother Emanuel AME Church affected us deeply,” the authors said in a group statement. “This book is our attempt to honor those whose lives were lost, the survivors and their families by telling their stories in the context of Charleston, the nation’s racial history and the social justice efforts that have been the hallmark of the African Methodist Episcopal Church.”

Thomas Nelson, a division of HarperCollins, is a world-leading provider of inspirational content and has been providing readers with quality life-changing product for more than 200 years. The publishing group provides multiple formats of award-winning Bibles, books, gift books, cookbooks, curriculum and digital content, with distribution of its products in more than 100 countries. Thomas Nelson is headquartered in Nashville, TN. 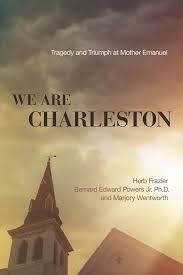