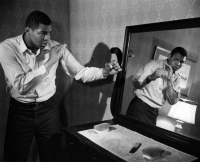 The Film Detective is celebrating February with an entire month of films dedicated to Black History Month, as well as all-day Academy Awards and Valentine's Day marathons.

The Film Detective's flagship channel will feature a line-up dedicated to Black History Month, every Wednesday at 6:00 PM EST. Titles from pioneering African American filmmaker Oscar Micheaux will receive a spotlight throughout February, including God's Stepchildren (1938) and Within Our Gates (1920). Stories of famous figures Joe Louis and Jackie Robinson will come to life on screen in The Joe Louis Story (1953) and The Jackie Robinson Story (1950).

Complementing the live channel, viewers of the TFD app can honor Black History Month with modern-day icons including Sidney Poitier and Cicely Tyson. Celebrate actor Sidney Poitier's 93rd birthday in February with his role in The Mark of the Hawk (1957) and Cicely Tyson with her Oscar-nominated performance in Sounder (1972).

Sounder (1972) will be one of many Oscar-nominated films in the spotlight this February. Beginning on Feb. 7, at 12:00 PM EST, fans can prepare for the Academy Awards on Sunday with a weekend-long marathon of Oscar-nominated and winning films of years past. Best Leading Actors José Ferrer and Charles Laughton take center stage in Cyrano de Bergerac (1950) and The Private Life of Henry VIII (1933).

Before there was Garland, Streisand, or Gaga, Janet Gaynor received an Oscar nomination for her performance in A Star is Born (1937). Janet's performance will be joined by stunning award-nominated performances from Bette Davis and Susan Hayward in Of Human Bondage (1934) and Smash-Up: The Story of a Woman (1947).

Fans will not have to wait long before the next movie marathon from The Film Detective. Following the Academy Awards, TFD is celebrating the day of love with 24-hours of romance on Valentine's Day. Romantic comedy fans will swoon over My Man Godfrey (1936) starring Carole Lombard and William Powell, while hearts may skip a beat over Van Johnson and Elizabeth Taylor's The Last Time I Saw Paris (1954). Any way film fans are celebrating this month, The Film Detective is thrilled to present a line-up to honor February's auspicious occasions.

About The Film Detective:

The Film Detective (TFD) is a leading distributor of restored feature films and television. Launched in 2014, TFD distributes its library of 3,000+ hours of film on DVD and Blu-ray and through such platforms as TCM, EPIX, Pluto TV, PBS and more. Since 2018, TFD released its classic movie app and launched 24/7 channels on Sling TV, STIRR and DistroTV.