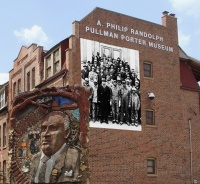 (Black PR Wire) CHICAGO, IL -- The National A. Philip Randolph Pullman Porter Museum (NAPRPP) in collaboration with the Chicago Federation of Labor, Presents the 2019 A. Philip Randolph “Gentle Warrior Awards.” The gala and fund-raiser will be held at Chicago’s historic Parkway Ballroom, 4455 S. King Drive on Sunday, on February 24. From 5:00 p.m. to 9:00 p.m.

The “Gentle Warrior Award” pays tribute to A. Philip Randolph, Founder of the Brotherhood of Sleeping Car Porters, the first Black Labor Union in America to be chartered under the American Federation of Labor. Randolph was one of America’s foremost labor and civil rights leaders, who became known as the “Gentle Warrior.”

In 2000, in his honor, the NAPRPP Museum created the Gentle Warrior Awards Gala to recognize individuals who exhibit a similar commitment, focus and, tenacity that Randolph displayed. The 2019 Gentle Warrior Award Honorees include: Juliana Stratton, who is the first Black woman elected lieutenant governor of Illinois. ▪ Jessie White, veteran Secretary of State, who has held and effectively run the office longer than any other and ▪ Robert Reiter, President of the Chicago Federation of Labor, the third largest central labor council of the national AFL-CIO. Reiter previously served two terms as Secretary-Treasurer of the CFL from July 2010 to May 2018.

This year’s, the Gala Fundraising event will also celebrate two important milestones: The museum’s 24th anniversary of celebrating Black Labor History and the 82nd anniversary of the signing of the first collective bargaining agreement between an African American labor union (the Brotherhood of Sleeping Car Porters) and a major U.S. corporation, the Pullman Company.

Museum founder Dr. Lyn Hughes states, “2019 represents a year of change for the museum. It is the first time in our 24-year history that we have a new multi-generational and multi-racial board of directors. The world is changing, and we want to do all that we can to ensure the museum stays relevant. The key is to blend diversity of thought into our leadership team, and the new board of directors will ensure we continue building on this foundation.”

The 24-year-old NAPRPP Museum, is located in Chicago’s first National Park, the Pullman National Monument that was designated a National Park by President Barack Obama in February of 2015. The museum has three distinctions: (1) It is the only one in the nation that bears the name of A. Philip Randolph and the Pullman Porters (2) It is the only African American site in the Pullman National Monument. (3) and it is the only museum of its kind worldwide that exclusively interprets the Pullman Porters’ component of African American history.For tickets and more information about the event visit our website at www.2019GentleWarriorAwards.com.

About The National A. Philip Randolph Pullman Porter Museum (NAPRPPM) We are celebrating the 24th Anniversary of the National APR Pullman Porter Museum, an IRS certified 501( c)(3) institution. The museum is located in the National Park Service-Pullman National Monument District in Chicago, Illinois. It is the only African American site located in the monument. Not only is the museum about history, its creation also made history, founded by Dr. Lyn Hughes, an African American female. The museum was a project developed with primarily private funds. Throughout the years the museum has been recognized as the only one of its kind worldwide. There are countless exhibits and information about the Pullman Porters. However, NAPRPPM is the only Museum which bears the name of A. Philip Randolph and the Pullman Porters. It is the first Black Labor History Museum in the United States that exclusively tells the story of the Pullman Porters, and the journey of establishing the Brotherhood of Sleeping Car Porters labor union, and A. Philip Randolph, the Founder. The museum presents and interprets content intended to educate the public on the impact the union had on organized labor and on America’s modern day civil rights movement. www.pullmanportermuseum.com