The seven scholarship recipients will each receive a $25,000 award to offset the expenses of their legal education. They will join the firm as summer associates in 2020, with two joining in New York, three in Boston, one in Chicago, and one in Washington, D.C.

Roscoe Trimmier Jr. was a celebrated trial attorney and longtime partner at Ropes & Gray. He was the firm's first African-American partner and played a pioneering role in advancing Ropes & Gray's diversity and inclusion efforts. The Roscoe Trimmier Jr. Diversity Scholarship was established in 2015 to commemorate his legacy as an accomplished litigator and business leader, and to further advance diversity at the firm by attracting exceptional talent from backgrounds that are historically underrepresented in the legal profession. In five years, the firm has awarded 27 scholarships.

"The accomplishments of these exceptionally talented students speak volumes about their dedication to legal scholarship and their potential to excel in future professional endeavors, whether in business, civic or government roles and as leaders in our communities," said Joan McPhee, a partner and co-chair of Ropes & Gray's diversity committee.

"Our aim is to empower and encourage high-performing students of diverse backgrounds while honoring the legacy of Roscoe Trimmier, who himself was an exemplary litigator and leader," said Leslie Spencer, a partner and co-chair of Ropes & Gray's diversity committee. "Roscoe's commitment to fostering an inclusive environment endures at Ropes & Gray. We work hard every day to ensure that diverse attorneys excel."

"Ropes & Gray is committed to advancing diversity and inclusion in the law profession, including by offering the Trimmier Scholarship. The firm provides industry-leading professional development, mentorship and leadership programs to support attorneys with diverse backgrounds," said Ropes & Gray's chair-elect Julie Jones. "It's impressive to see what this year's recipients have already accomplished, and I look forward to watching their many successes over the years to come."

The 2020 scholarship recipients – and short biographies that outline their accomplishments – are below.

Alexandre Edde Diniz de Oliveira, Harvard Law School, is a John M. Olin Fellow in Empirical Law and Finance, and the recipient of the Dean's Scholar Prize in Civil Procedure, Criminal Procedure: Investigations, Criminal Law and Human Rights and International Law. Prior to law school, he was an associate at Veirano Advogados in São Paulo, Brazil, where he worked on cross-border acquisitions on behalf of private equity funds, corporations and financial institutions. His publications include "The Board Against All Odds: Assessing the Powers of Delegated Management in Brazil" and "Regulating Innovation: Crowdfunding and Brazilian Entrepreneurship."

Zane Fernandez, Boston College Law School, received honors as a 1L Scholar and also from the Leadership Council on Legal Diversity. While serving as a 1L summer associate at a national law firm, he researched strategies for preparing a business for a potential sale. As a legal intern for the Navajo Nation in Arizona, he drafted an executive order for the Navajo Nation President to sign a new employee wellness program into law. As a legal researcher at a prominent New York law firm, he managed a veteran's pro bono project focused on barriers to health care benefits.

Kacie Hollins, Northwestern Pritzker School of Law, serves on The Journal of Criminal Law & Criminology and, as a research assistant for a prominent law professor at the school, examines a wide range of criminal law issues. A natural leader, Kacie is the co-president of StreetLaw, a student organization focused on legal education for high school students in Chicago. Kacie also serves on the Black Law Students Association and as a representative to the American Bar Association, Student Bar Association. In her 1L summer, as Coles Fellow at the Illinois Human Rights Commission, Kacie reviewed case files from the Department of Human Rights and made recommendations to commissioners.

Thea John, Columbia Law School, is a winner of the Columbia Law School Negotiation Competition. She serves as the staff editor of the Columbia Journal of Gender and Law, and holds leadership roles in several organizations, including First Generation Professionals, the Black Law Students Association, and the Admissions Student Ambassador program. As a 1L summer associate at a New York law firm, she analyzed trends in proxy access for the top 100 public companies and created resources for asylum seekers from Burkina Faso and Ivory Coast. As an SEO Law Fellow at another prominent New York law firm, Thea researched and analyzed director liabilities under the federal securities laws. She has also previously served as a litigation paralegal.

Armando Marin, Benjamin N. Cardozo School of Law, is staff editor of the Cardozo Law Review, and a participant in the summer 2019 NYC Bar Diversity Fellowship Program. Among other honors, he is part of the Heyman Scholars Program and is a recipient of a Dean's Merit Scholarship. He is involved in the Entertainment Law Society, the Latin American Students Association, and OUTLaw. As a 1L, he was a legal intern at Viacom, Inc., where he rotated through various departments, including Music, Media and Licensing, and Intellectual Property. Armando completed a fellowship in 2018 at the New York State Judicial Institute, where he was selected as one of 17 fellows from minority backgrounds to take practice courses to prepare for law school.

Aysha Thompson, Howard University School of Law, is a staff editor for the Howard Human and Civil Rights Law Review, a candidate for the Alternative Dispute Resolution Certificate Program, Parliamentarian for Epsilon Sigma Iota Sorority, Inc., and a student attorney in the Child Welfare Clinic where she represents parents on child abuse and neglect allegations. During her 1L summer, Aysha was a judicial intern for Judge George L. Russell, III in the United States District Court for the District of Maryland. In that role, she drafted bench memoranda and letter orders on procedural disputes, analyzed briefs, and revised clerks' memoranda. Previously, she served as a student intern, then judicial assistant for Judge Lisa Woodruff-White in the Family Court of East Baton Rouge Parish. During that time, Aysha scheduled hearings and trials, prepared dockets, and trained other judicial assistants.

Aaron Yemane, Georgetown University Law Center, is a member of the Black Law Student's Association. He was extended an invitation to join the New England Law Review and is a Dean's List honoree. Aaron also competed in the American Bar Association's Client Counseling Competition, and his team placed 3rd in the regional round of the competition. As a 1L law clerk at a Boston law firm, Aaron conducted legal research regarding property law doctrines of ownership and drafted a legal opinion regarding the effect of letters of credits in bankruptcy proceedings. As an undergraduate, he was president of MOSAIC (Men of Service, Academia, Integrity, and Character) at Stonehill College. Previously, Aaron interned for Hon. Michael C. Bolden, First Justice for the South Boston Division of the Boston Municipal Court in Massachusetts.

Ropes & Gray is consistently recognized as one of the nation's leading law firms for diversity overall, as well as with respect to minorities, LGBTQ individuals and women. We are committed to fostering an inclusive community of professionals of all races, religions, genders, sexual orientations and family structures.

In the 2019 Vault survey, Ropes & Gray was ranked number eight for overall diversity, marking the 10th consecutive year that the firm has been ranked in the top 10. For the past 11 years, the firm received a perfect score on the Human Rights Campaign Foundation's Corporate Equality Index (CEI), earning designation as a "Best Place to Work for LGBT Equality." Today, 45 percent of our lawyers – and 30 percent of the firm's partners – are women, and that percentage continues to grow. They hold significant leadership positions at the firm, including Julie Jones, who will assume the role of chair on January 1, 2020.

Roscoe Trimmier Jr. practiced at Ropes & Gray for 35 years, from 1974 until his retirement in 2009, serving as chair of the litigation department and head of the environmental practice group. His professional distinctions include induction as a Fellow of the American College of Trial Lawyers and recognition on lists of the Best Lawyers in America and Massachusetts Super Lawyers.

Mr. Trimmier was a mentor to many young attorneys during his tenure, and served on both the hiring and associates committees. An early leader of the firm's highly regarded diversity efforts, Mr. Trimmier was a member of the Massachusetts Black Lawyers Association and the Boston Bar Association, as well as one of the founders of the Boston Lawyers Group and chair of the American Bar Association's Standing Committee on the Federal Judiciary.

Watch this video to learn more about Roscoe Trimmier Jr., the scholarship that carries forward his legacy of excellence, and the firm's ongoing commitment to fostering a diverse and inclusive workplace. 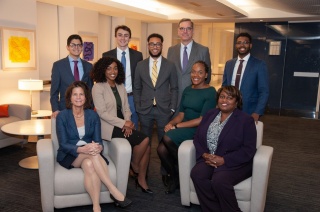