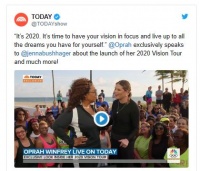 Winfrey, 65, launched the 2020 Vision: Your Life in Focus tour in Ft. Lauderdale, Fla., during Friday's episode of Today ahead of the tour's opening date in the city Saturday.

Winfrey said the motivational tour is meant to inspire people across the country to transform their lives.

"It's 2020. It's time to have your vision in focus and live up all the dreams you have for yourself," she said.

Winfrey stated her belief that "healthy is the new skinny" and said the tour is "all about" embracing wellness as a whole.

"Wherever you are in your weight loss journey, if you're focusing on mind, body and spirit and making yourself as well and whole as possible, then you're on the right path," she said.

Winfrey said in an Instagram video Thursday that singer and actress Lady Gaga will join her in Fort Lauderdale. The video shows Winfrey singing the hit song "Shallow," which Lady Gaga performs in the film A Star is Born.

Winfrey initially announced the 2020 Vision tour in September. On the tour, Winfrey will share the ups and downs of her personal wellness journey and help the audience to develop their own action plans for 2020.

Winfrey first partnered with WW in 2015.

Here's the full list of dates for the 2020 Vision tour: