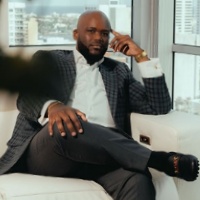 Alexiou Gibson is the epitome of a successful black business owner who has grown his company into a multi-million-dollar business.  This makes it perfectly fitting that Black PR Wire profiles this consummate professional during Black Business Month.

Gibson is the CEO and Founder of the Transformation Factory (TTF), a Florida-based business that produces a line of flavored sea moss.

The Grand Bahama native appeared on the popular show, Shark Tank, and made an unforgettable impression. Shark Tank, of course, is the platform that allows entrepreneurs to present and pitch their business ideas to successful moguls in the hopes of scoring an investment in their concepts and ideas. Gibson was able to stand in front of powerful entrepreneurs such as Mark Cuban, Barbara Corcoran, Kevin O’Leary, Lori Greiner and guest “shark” Kevin Hart, and speak on their level.

In his pitch to the “sharks,” Gibson said his company had $3.5 million in sales in just 11 months into its formation, with a 35 percent profit margin.  He explained that it was all direct to consumer and 100 percent online.  Gibson’s pitch worked and sold “sharks” Cuban and Hart - resulting in TTF receiving a $600,000 Shark Tank deal. Scoring the Shark Tank deal was a big deal! This meant that after years of hard work and dedication, Gibson was well on his way to seeing his company’s mission come to fruition.

Today, he is realizing his dream, but the backstory of Alexiou Gibson is just as impressive as his Shark Tank pitch. The Transformation Factory is truly Gibson’s passion. He began his journey to transform his life and body after his physician told him that he would not live to see thirty. Weighing in at over 500 lbs. at age 21, Gibson was told that his body was in disrepair and he was too far gone to make any significant changes to his health. At that time, his body was riddled with multiple chronic conditions. He also had respiratory conditions, making it difficult to walk long distances. Although Gibson may have been overweight, fortunately, he was also an over-achiever.

With his Sea Moss product, he completely changed his life and now lives a vegan lifestyle. He powers through dips and squats, and finds any opportunity he can to coach, inspire and encourage. His transformation came as a result of hard work, determination and pure ingenuity. He created a life-changing Sea Moss product which delivers a staggering 92 of the body’s 102 essential minerals. Made for everyone, it is vegan, paleo and keto-friendly.

In addition to TTF, Gibson also has a full-service production company called H.AM that has been in business for more than eight years.  However, now being at the helm of his newest venture, The Transformation Factory, he is able to follow his true passion. Since Gibson has transformed his life with the Sea Moss product, he is on a mission to coach, inspire and encourage others to transform theirs, as well.  Through TTF, Gibson helps motivate and inspire others on their journey – whatever that may be. Having lost over 300 pounds, he leads TTF as a continuation of his own transformation from one seeking answers, to one providing answers.

TTF is the culmination of his more than 10 years of battling health issues.  He has used every disappointment, achievement, heartbreak, success, and learning moment to create the concept of TTF as a resource and inspiration for those trying to become their best selves. The TTF website serves as a depository of information, tools, support communities and products to aid the community in forging their own path.

Without a doubt, Alexiou Gibson is a business mogul in his own right. With a passion for putting the community on a positive path, he is committed to advocating for the importance of health and awareness. The Transformation Factory will continue to transform lives and is surely positioned for dealing with exponential growth.